This story is written from an interview with Anurag Sinha, Assistant Professor at the Department of Political Science, CLA and coordinator of the Series.

The South Asia Seminar Series (SASS) returns this fall after a hiatus of three years. The University of Minnesota has a proud tradition of South Asian studies, past and current faculty and graduate students having produced innovative research in their individual fields. The dynamism of this research is sustained by the remarkable resources of the Ames South Asia Library, while the University Press has been at the vanguard of publishing volumes at the cutting edge of the field. We hope that the seminar series will contribute in its small way to South Asia community at the U.

The seminar series hopes to showcase the incredible disciplinary and methodological diversity of South Asian studies today. We hope that the seminar presentations will reflect this diversity. Equally, SASS will serve as a forum for the amazing breadth of South Asia-related research in the arts, humanities, and the social and applied sciences at the U and neighboring institutions in the Twin Cities. As we fully reemerge from the pandemic, SASS aims to be a genuinely interdisciplinary home for the scholarly community working on South Asia.

We’re employing a new format for the seminar this year. Invited speakers will circulate works in progress in advance; the seminar will begin with a short comment on the paper by a member of the U community followed by a response by the speaker. The rest of the session will be devoted to an extended discussion of the project. This will give speakers the opportunity to avail of interdisciplinary feedback at a formative stage of their projects. At the same time, SASS participants will have helped contribute to new knowledge production in the field.

There will be three or four SASS events each semester (we’re still finalizing the roster of speakers!). By popular vote our seminar will meet at 3pm on selected Tuesday afternoons. Our first meeting is on September 27. We will also host a reception at the beginning of the academic year. Please look out for emails from ICGC announcing the events. The interdisciplinary and international nature of the seminar series makes ICGC its natural home. Over the course of the year, SASS will host speakers whose work addresses the major thematic concerns of ICGC through a variety of social and political questions arising out of South Asia and approached from multiple perspectives. We hope that the talks will be especially beneficial to the many graduate students involved with ICGC and drive forward a more global and inclusive pursuit of scholarship.

Anurag Sinha is originally from Kolkata, India, where he studied political science for his undergraduate major at Jadavpur University. Later, he read political theory at the London School of Economics as a Commonwealth Scholar and completed a Ph.D. in political science at Yale in 2018.  Dr. Sinha briefly taught social studies at Harvard before coming to the U in the fall of 2019. He works at the intersection of political theory, the history of political thought, and British imperial and South Asian history. His work focuses on broad patterns of intellectual and conceptual change following worldwide European imperial expansion in the early-modern period. He is writing a book on the early decades of British rule in South Asia, which highlights the role of imperial experience as a source of modern ideas of sovereignty and political economy. The courses Dr. Sinha teaches echoes his research interests. He teaches an introductory lecture course on political ideas; another lecture course on themes of revolution, democracy, and empire; a graduate course on early-modern political thought; and, next spring, a graduate seminar on empire and modern political thought. 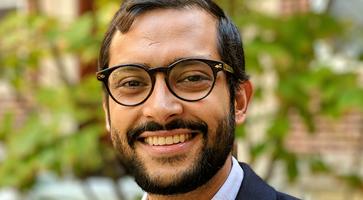